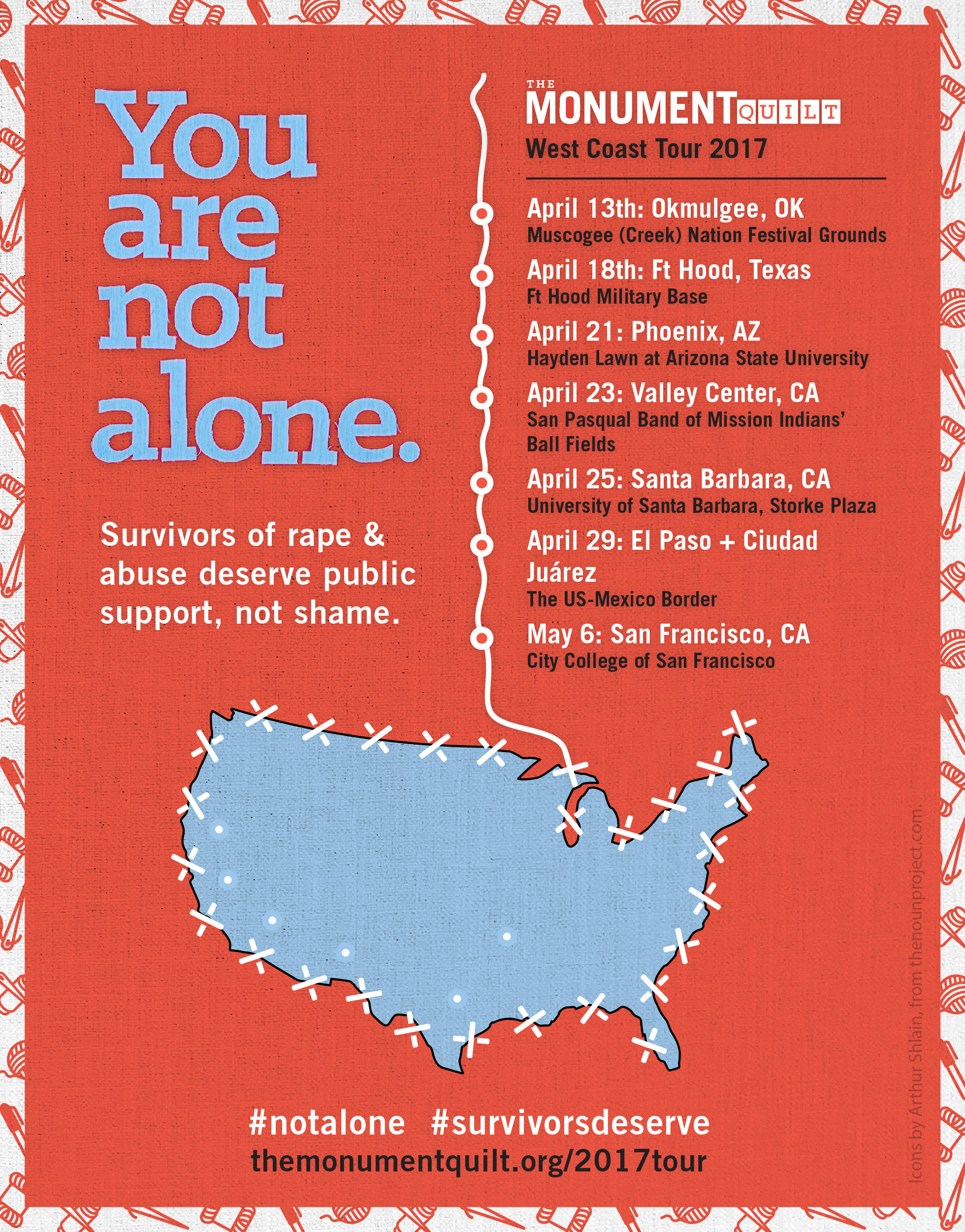 Learn more about our massive protest at the US/Mexico border here!
On Trump’s 100th day in office, anti-violence advocates are planning a massive demonstration at the US-Mexico border to rally against US immigration policies that create high rates of sexual violence against undocumented immigrants. On April 29th, over 2,000 quilt squares created by survivors of rape and abuse, will be displayed at the US-Mexico border in El Paso, Texas and Ciudad Juárez, Mexico with a project called The Monument Quilt.
Leading up to this historic display and during sexual assault awareness month, the Monument Quilt is traveling the US and Mexico with stops in California, Arizona, Oklahoma and Texas. The quilt is partnering with Native American Tribes, Immigration Advocacy Groups, College Campuses and a US military base to build a national call for communities to organize against sexual and domestic violence. Survivors and advocates are invited to join national call to action by hosting their own quilt making workshops on and leading up to April 29th.
While the US is absorbed in a national conversation about immigrant rights, one of the most common human rights abuses perpetrated against undocumented immigrants has been pointedly left out of the conversation. According to Amnesty International Mexico, more than 70% of undocumented immigrant women experience sexual assault while migrating to the United States. Once in the US, Immigrant women are three to six times more likely to experience domestic violence than U.S.-born women. Abusers and perpetrators use undocumented immigrant’s fear of deportation and going to the police to commit rape and abuse with impunity, and recent anti-immigration rhetoric and policies has worsened these fears.
Through survivor’s own stories, the Monument Quilt makes visible the ways that US policy and culture collude to create high rates of violence. Four in five Native women will be raped, abused or stalked in their lifetime while the overwhelming majority of their perpetrators are Non-Native (96%). In 2014, 10,600 men and 9,600 women were sexual assault while serving in the US military and 85% of these victims did not report their crime. Of reported crimes only 9% of perpetrators were convicted of a sex offense by the US military.
The Monument Quilt, is a growing collection of over 2,000 stories from survivors of rape and abuse. Written, painted and stitched onto red fabric, these stories have been displayed 30 times in 26 different cities and towns from Washington D.C. to White River, South Dakota. The quilt is building a new culture where survivors are publicly supported, not shamed. Survivors and advocates are invited to organize in their own communities on April 29th by hosting quilt making workshops. “We are calling on individuals to host workshops in their homes, communities and schools on Trump’s 100th Day in office to promote dialogue, relationship building and healing in the face of so much trauma and terror celebrated at the highest level of government,” says Rachel Gilmer, leader with the Monument Quilt. All quilt squares created during the National Day of Action will be added to the growing Monument Quilt which, in a future display in Washington DC, will blanket over one mile of the national mall. Organizations wishing to join as sponsors can email upsettingrapeculture@gmail.com. Instructions on making a quilt square can be found here and resources to host a quilt workshop are here.