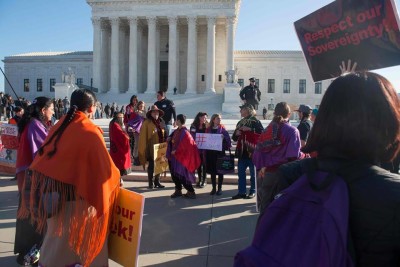 ​WASHINGTON DC. On Monday, December 7th, while the Supreme Court was hearing oral arguments in Dollar General vs Mississippi Band of Choctaw Indians, over 300 gathered outside in support of tribal jurisdiction and safety for Native women and Native youth.

Hundreds gathered to demonstrate against this attack on tribal jurisdiction through march, song, speeches, prayer, and a large quilt containing stories from survivors of rape and abuse. The demonstration was organized by National Indigenous Women’s Resource Center, Indian Law Resource Center, and FORCE: Upsetting Rape Culture.

Fabric squares were sewn onto shawls and worn by Native women on the steps of the Supreme Court. Across the street on the US capitol lawn, another 700 testimonials from The Monument Quilt underscored the human stories and real consequences behind this threat on tribal jurisdiction.

One quilt square read, “Your attack on Tribal Jurisdiction is an attack on my body.”

Another stated, “Reclaiming sovereignty over Native lands and Native bodies.”

Lisa Brunner (White Earth Ojibwe), survivor and national advocate who wore a shawl in the demonstration stated, “Our ancestors had the understanding that times were going to be hard for us.  With this understanding, they ensured through treaties that our inherent sovereignty as Native Nations would protect us and future generations. Today as we stood before the Supreme Court we carry forth our responsibility to be the ancestors our future generations need us to be.  As we women stood with our shawls, facing the Supreme Court, I sent a spiritual message inside the courtroom:  we will be seen, we will be heard, we will be felt, and we will be protected.” 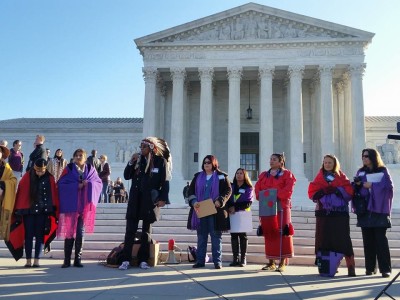 ​Chief Alvon Looking Horse told those gathered, “Our prayers must be strong that we can make a difference in this world.”

Attorney Mary Kathryn Nagle (Cherokee Nation) joined the demonstration after listening to the oral arguments and told the crowd, “Disrespect of our courts is racist. Our courts are not inferior.”

#ShameOnDollarGeneral trended on twitter in the DC region. People joining the online conversation started their own hashtag, #BoycottDollarGeneral, calling for a holiday season boycott of the retail giant. 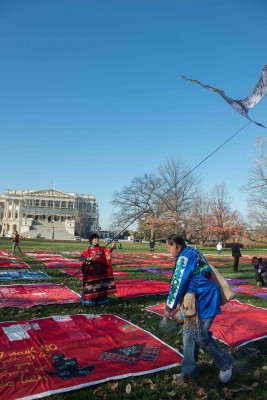