Connecticut Senators Richard Blumenthal and Chris Murphy will speak Tuesday at the first-ever public monument to survivors of rape and abuse.  On students’ first day of fall semester, members of the Wesleyan University community will witness stories from survivors of sexual violence stitched together on 250 bright, red quilt squares.  The giant, touring Monument Quilt will be on display from 3 to 7pm on Sept 2 on Wesleyan’s Foss Hill.  The quilt is an on-going project aimed to create public healing space for survivors.  The event underscores the urgent need to support survivors of campus sexual assault across the US.

Sen. Murphy and Sen. Blumenthal are visiting Wesleyan and The Monument Quilt in the middle of a national debate on campus sexual assault legislation.  Sen. Blumenthal is part of a bipartisan group spearheading the Campus Accountability and Safety Act. If passed, the bill would require campuses to provide a confidential advocate for survivors, training for campus personnel, and change federal penalties for schools that do not report assaults in compliance with the Clery Act.

“Campus sexual assault is staggeringly prevalent and stunningly underreported. Assault-free campuses must be the new norm,” said Sen Richard Blumenthal about the importance of the new legislation.

Last spring, in response to a lawsuit filed against a fraternity by a rape survivor, a graduating Wesleyan University senior created a rap claiming that the real victims of the controversy were fraternity brothers. The viral rap, along with other instances of backlash against the suit, created a hostile campus climate for rape survivors.

“Starting the year off with The Monument Quilt is intensely more productive than how the last year ended, a tone of support and affirmation rather than defensiveness and challenges,” says Wesleyan student Yael Horowitz.

“Rape culture might occupy a physical and psychological space on our campus, but so does this network of support [for survivors], so does this quilt,” says Wesleyan student Tess Altman.

“The worst disservice that can be done to survivors is maintaining silence. The Monument Quilt’s importance lies not only in the space it creates for survivors to heal, but in the powerful, and very tangible, message that it sends to our community. It shatters the burden of a silence that should never lie upon the shoulders of survivors,” says Wesleyan student Alton Wang.

The demonstration at Wesleyan, organized by survivor-led art and advocacy groupForce in collaboration with campus activists, is the last stop of a13-city US tour of the Monument Quilt. The public monument to rape survivors has been witnessed this month from Queens, NY to White River, SD to garner widespread public support before heading to Wesleyan. 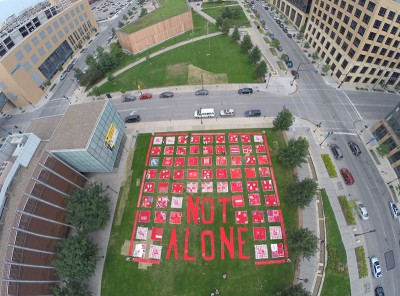 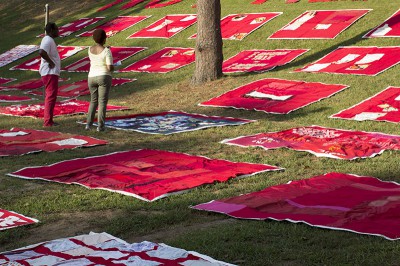