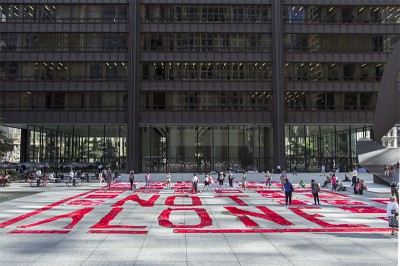 “I’ve been describing the quilt as a punch in the gut. I felt like my breath was taken away by the power of those pieces. By how painful they are and how powerful they are and how joyful. The power of these testimonials is the power to move people,” said Sharmili Majmudar, Director of Rape Victim Advocates. “And hopefully get past what people have as their pre-conceptions about sexual violence.  What is means to be a survivor, who survivors are and all those things and instead really connect on an emotional level.” 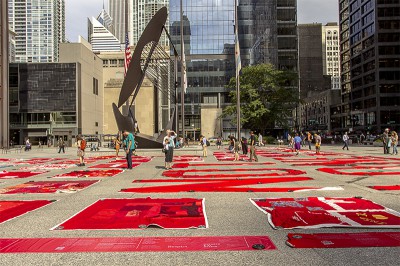 Visitor to the display Emily Sha stated, “On one hand its really overwhelming to see how many pieces there are.  The sheer number and the collective pain. But at the same times its so encouraging to see how much strength there is.”

Sha went on to say, “I’ve never been in a space thats been this public, where I’ve felt safe to say that I am a survivor and not expect you to run away.  I feel, as a lot of other people feel, that when you tell your story its a burden, especially stories of sexual violence, especially childhood sexual abuse.  So it becomes the burden of the survivor to figure out who to tell and how much to tell.  And that can be such a painful process to feel like that facet of you is too much for anyone else to hold.  So I think a space like this, with such a diversity of stories, is really needed.” 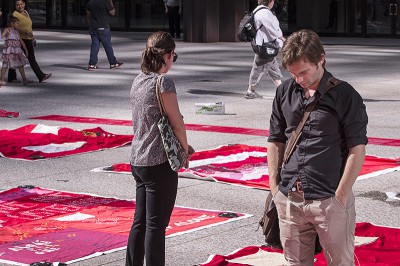 When asked about the importance of the quilt coming to Chicago Majmudar of RVA stated, “In chicago, like many cities, we continue to have few spaces that are truly supportive of survivors and that have survivors’ healing as central. Chicago is an incredibly diverse city and it is also an incredibly segregated city. There are many communities that are and feel invisible. And resources are not divied up in equitable ways. I think that a piece of what the quilt does is to bring all of those stories forward.  So its not just stories that we are used to hearing, but also stories that we don’t hear.”

Each quilt is completely different, like each individual experience with sexual violence.

One survivor wrote, “It was men who taught me that assault only happens to women, robbing me of the language I needed to name and process my experience.”

Sewn onto one quilt square are the shorts and t-shirt the survivor was wearing at the time of their assault.  The square simply states, “STRONG”. 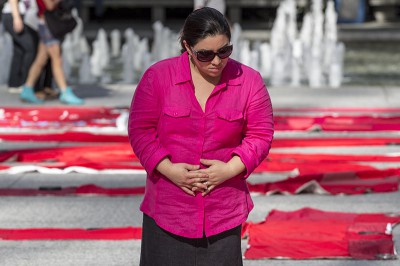 People who are interested in adding their own quilt square to the project can find instructions here.

The Chicago display was the eigth stop on a 13-city US tour.  The Monument quilt will continue traveling this month to visit Chicago, IL; Pittsburgh, PA; Queens, NY; Durham, NC; Baltimore, MD; and Wesleyan University in Middletown, CT.

The 100 x 100 foot quilt displayed in Chicago Tuesday is only the beginning. Over the next two years, more stories will be added to The Monument Quilt. In a final display, The Monument Quilt will blanket over one mile of the National Mall with thousands of quilt squares to spell “NOT ALONE.” 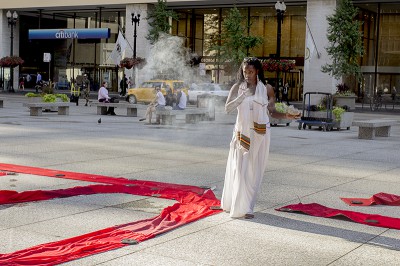 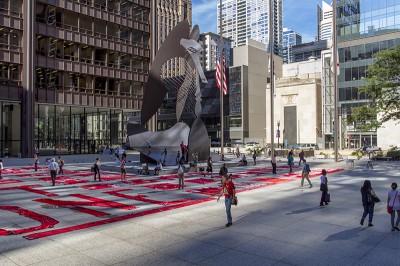 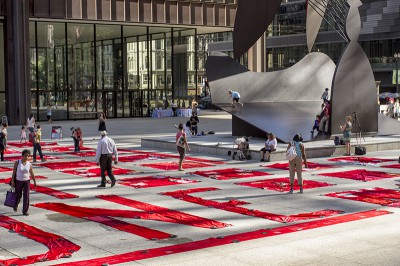