FORCE and Native advocates throughout the country celebrate and vow to continue to work to support survivors of sexual violence and ensure Tribal sovereignty.

[Washington, DC] Today’s Supreme Court ruling in Dollar General vs Mississippi Band of Choctaws upholds tribal jurisdiction.  With a 4-4 tie, the lower court ruling in favor of the tribe stands.

Had the court ruled in favor of Dollar General, no American Indian Nation would have been able to try any civil case involving a Non-Native person or corporation. With the tribe’s civil jurisdiction upheld, Dollar General will now pay damages to a family whose child was sexually assaulted in their store over a decade ago.

Native advocates gathered at the Supreme Court in December on the day of the oral arguments to demonstrate that tribes need jurisdiction to protect their citizens from staggering rates of violence. We know that 4 in 5 Native Americans have been raped, stalked or abused in their lifetime and 1 in 3 Native women has been raped, stalked or abused in the past year alone. Almost all (90% of women and 85% of men) of Native survivors have been assaulted by someone who is not Native. The SCOTUS ruling means that tribes can continue to exercise their inherent sovereignty by issuing protective orders for Non-Native people abusing tribal citizens.

“I am a survivor of domestic violence and my abuser was non-Native. The Dollar General Case threatened the only recourse we have to divorce or file Protection Orders against non-Natives who choose commit acts of violence against us,” says Lisa Bruner (White Earth Ojibwe). “We as a people have the right to be protected from violence.”

This case originated from the sexual assault of a minor in a Dollar General store.  In 2003, a 13-year-old boy participated in a youth-opportunity job program. While on the job, the 13-year-old says he was sexually assaulted several times by the store’s manager, Dale Townsend. His parents brought an action against Dollar General in Tribal Court, seeking monetary compensation for pain and suffering and to cover the youth’s medical and trauma recovery expenses. The retailer retaliated with a lawsuit of its own, arguing that the Mississippi Band of Choctaws should not have jurisdiction over Dollar General, because the corporate giant is non-Indian.

American Indian Tribes are sovereign Nations, like the US or Switzerland, with their own land, citizens, laws and court systems.  Their independent existence pre-dates the existence of the United States. Native advocates are continuing the fight for full restoration of tribal sovereignty.

As we celebrate this case, we urge people to center Native voices in the conversation not only about the impact of this decision, but also the ongoing work needed to support Native survivors and to ensure the sovereignty of Tribes as they work to protect their members.

FORCE co-founder and member of the Cherokee Nation, Rebecca Nagle and Lisa Bruner are available for interview upon request.

To help the public understand the case, including the complex legal framework and the staggering statistics,  FORCE: Upsetting Rape Culture released an infographic earlier this week: 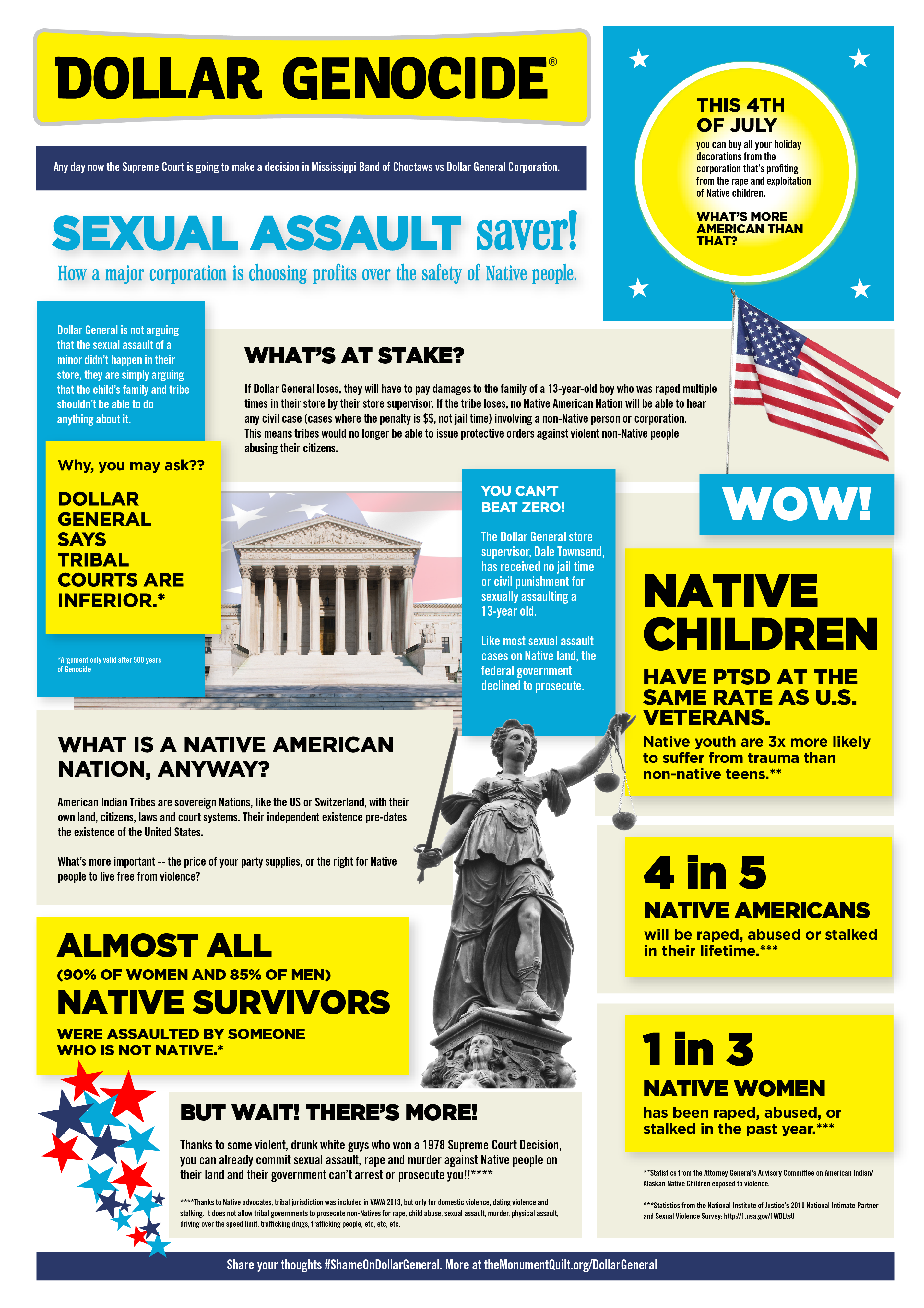