Native women in the United States are 2.5 times more likely to be victims of sexual assault. Shawn Partridge is too familiar with this reality. She has served as the Program Director of the Family Violence Prevention Program of the Muscogee (Creek) Nation for nearly three years. This week, as part of her work, Shawn is bringing the Monument Quilt to Tulsa.

The Monument Quilt is a bright, red, hand-sewn story of survival. Each 4-square-foot piece is created by a survivor of sexual assault or domestic violence. On Saturday, more than 400 such stories will be displayed in Tulsa. 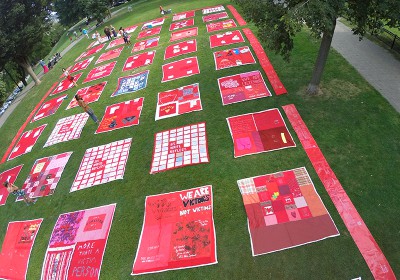 On April 4, FORCE and the Muscogee (Creek) Nationl will display the Monument Quilt, a public healing space by and for survivors of rape and abuse, at the Schusterman Center at the University of Oklahoma in Tulsa, located at 4502 E. 41st St. The event will be held from 11 a.m. to 3 p.m. The display is being planned in partnership with the Family Safety Center, University of Oklahoma, and Domestic Violence Intervention Services.

For Shawn, her work is neither easy nor simple, and she sustains her efforts with the knowledge that so many in her life have been impacted by sexual and domestic violence. “My step-sister was murdered as a result of a domestic murder-suicide when I was thirteen, so of course that impacted our family. As I was getting involved in this work, I was finding out that a lot of family and friends had been impacted by domestic and sexual violence, that I had never known about prior to working in this field.”

Shawn continued, “I do this work on behalf of my grandma. My paternal grandma was a victim of domestic violence. She passed away in 1943. As a native woman, you can imagine the lack of resources and support for her, especially during that time. That’s what continues to fuel the work and the successes that we see.”

In mainstream discourse on rape culture, many fail to make the connection between colonization and rape culture. The history of genocide, rape, and cultural decimation against Native peoples cannot be ignored when analyzing the rates of sexual and domestic violence against Native people today. Shawn elaborates, “I’m certainly not trying to speak for Native people in general or anything like that, but in looking at violence against Native women, it’s important to look at historical traumas and history. The legacy of colonization has had a tremendous impact on our people for generations. Our Elders tell us these kinds of victimization were not the kind of behavior that was tolerated or really practiced much among our people. They tell us this isn’t our way, so how has this violence become so dominant among our people? We have to look at the impact of colonization and the sexual violence perpetrated amongst native children at boarding schools. It’s as though we’ve been conditioned to accept this kind of victimization.”

Boarding schools served to forcibly relocate and assimilate Native children into a White supremacist society. These injustices were paired with rampant sexual abuse against Native children, with no real accountability for perpetrators of this violence. Colonization in all its forms has served as an antithesis to creating a culture of consent.

Shawn continued that a lack of accountability for perpetrators and high rates of multiple traumas also contribute to the heightened vulnerability of Native women and children. “Especially for Native women living on reservations, there is a high rate of victimization by non-natives, who come onto reservations and commit crimes thinking that there is no accountability for them, because, really, in a lot of ways there isn’t. Looking back again at our history, we know that there’s such a high rate of domestic violence occurring among our people. We tend to see when working with women who are in abusive relationships that sexual violence is more often than not occurring within that abusive relationship. We also tend to see an overwhelming number of women who are in an abusive relationship that have suffered child sexual abuse. We have so many children who suffer child sexual abuse or who grow up in homes exposed to violence which puts them at high risk for later victimization.”

Recently, provisions within the 2013 reauthorization of the Violence Against Women Act have granted tribal nations the jurisdictional authority to prosecute non-Natives who commit domestic violence against Native people. Shawn described the impact this provision will have for tribes.

“My friend, an incredible lawyer, advocate, and Muscogee citizen, Sarah Deer made a statement that Congress didn’t give tribes anything. They restored our authority to hold non-Natives accountable for their crimes. The prevalence of non-Natives committing these kinds of crimes and tribes not having the authority to hold them accountable has just been devastating. It’s going to be very interesting to see how this jurisdictional authority will increase safety for our people.”

“Our tribe was involved in helping promote the passage of this [VAWA] reauthorization, so it’s a very exciting time,” Shawn continued. “We were partaking in a lot of education and awareness and really getting the tribe on board in this process. We were collaborating with other tribes in the state to help educate our legislators about the needs that we have in trying to ensure the safety of our people. I had the opportunity to go to D.C. when Obama signed the legislation. You would have thought that this was Native-specific legislation because there were so many Native people there. The presence from tribes from all over the nation was amazing.”

Shawn commented that being a part of the pilot project of this provision has enabled tribes to collaborate. “Our tribe has participated in the pilot project and is working now on the final revision and review of tribal code before they send to counsel for approval and enact it into law. Theres’ a lot of work to do for tribes to make sure they’re prepared to exercise that jurisdictional authority.Through the pilot project, tribes were brought together to brainstorm, network, and develop these resources and tools to be sure that we’re prepared to exercise the jurisdictional authority.”

While this provision will help to hold non-Native perpetrators accountable, there is still much work to be done when it comes to providing access to healing and justice for Native survivors. Shawn described some of the barriers to reporting sexual assault. “Reporting right now, which would include accessing services, is still very low. We know this isn’t because it’s not happening. We know we have to work harder so that people know they are not alone, that services are available to them, that we can support them, and that they don’t have to suffer in silence. I think for a number of reasons, like shame, guilt, embarrassment, thinking their behavior contributed to their victimization in some way (which we know isn’t true), people do not report. We see this in the media for women generally: the scrutiny, the victim-blaming. I think when it comes to Native women, especially in our communities, which are often very close-knit communities, there is the fear that they won’t be believed. There is also the distrust of systems of law enforcement and even programs like ours sometimes.”

Shawn hopes the Monument Quilt workshops and display will bring community members together to support survivors. “Tulsa is where I grew up and where I live. It has a really high rate of domestic homicides, so much so that the mayor called together a special summit on domestic violence in February. With this increased attention on domestic violence, people are talking more, understanding more. When people come out to this public healing space, they show that survivors should be supported. For our quilt workshops, we have volunteers, mostly Elders, who will be doing some sewing on the quilt. To have Elders involved, a lot of whom have suffered domestic or sexual violence or child sexual abuse, this is so crucial. Bringing people of all ages to work on creating art that will be part of this exhibit is an amazing opportunity for us all.” 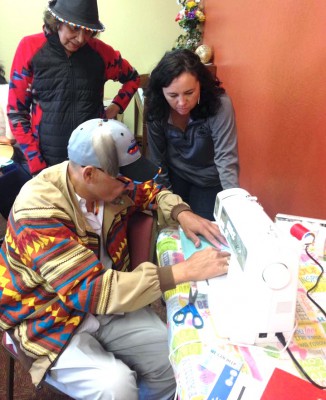