This August, visitors across the US will witness stories from survivors of sexual violence emblazoned on 200 bright, red quilt squares. During a 13-city tour, The Monument Quilt will be displayed at public parks, town squares, college campuses and high school football fields from White River, SD to Queens, NY. Larger than two basketball courts put together, the traveling quilt is part of an on-going project to create public healing space for survivors of rape and abuse.

“The Monument Quilt is touring the country and creating a national conversation about supporting survivors of rape and abuse. Together we will create a culture where survivors are publicly supported rather than publicly shamed,” says Hannah Brancato, co-director of Force, the organization behind the Monument Quilt.

At the displays, attendees will witness survivors’ stories, demonstrate public support, and transform their local response to rape. While walking through the rows of quilt squares, visitors will be able to write their own reflections, hear speeches from advocates and elected officials, and join in community.

Of the 200 stories, one quilt reads, “Please don’t tell me it didn’t happen or that I should be over it by now.” Another reads, “I reclaim my body as my sanctuary.” Survivors and allies who wish to add a square to the in-progress quilt can make one following these instructions. Squares will be added to the quilt in-person at the displays and collected over the next two years by mail. 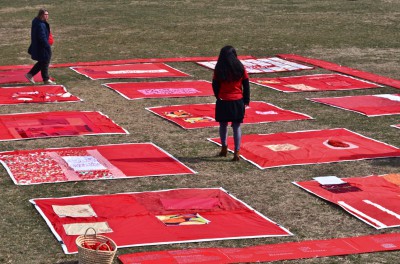 The 100 x 100 foot quilt that will be witnessed this summer is only the beginning. Over the next two years the quilt will continue to grow.  In a final display, the Monument Quilt will blanket over one mile of the national mall with thousands of quilt squares to spell “NOT ALONE”.